“Did you not understand my question?”

When I looked at him with my head cocked, an awkward smile appeared on his stiff face.

Heinley shifted backwards on the bed unsteadily, with the book still in his arms. The moment he reached the edge of the bed, he slowly stood up and backed toward the door.

Anyone could tell he wanted to run away.

“What are you doing?” I asked coldly.

Although he answered with a pleasant voice, he still moved towards the door.

Hearing the determination in my voice, Heinley sighed. However, he approached with big steps.

I didn’t expect him to do that. By the fourth step he was on the bed and by the fifth he was inches from my face. He was cute, but I could tell he was trying to use his handsome looks to soften me up, so I frowned and said.

“Step back. Take a step back.”

Unlike the big steps he took to approach me, this time Heinley only took a small step back.

I spoke coldly and Heinley finally stepped back properly and lowered his head. The book in question was still in his arms.

Once I reached out with my hand, Heinley hesitated before finally handing me the book he had been reading on my belly.

I knew it. I assumed it from the first moment. Glancing at the contents, I could see that it was a war novel. A novel that recounted many bloody events.

He was reading this on my belly?

As I stared at him with my arms crossed, Heinley excused himself and forced a smile.

“My Queen… it’s believed that one can influence a baby’s future by speaking to it in its mother’s womb.”

“So you expect our child to become a king of war?”

“That would be nice…”

“I read children’s books to the baby to keep its mind clean. Do you poison our baby’s mind while I sleep?”

“It’s just that… I want a brave child to be born.”

“The little bird I saw in my dreams was very naughty… it needs to be educated early on.”

What? Naughty? Isn’t he talking about himself?

“The little bird I saw in my dreams was very cute and obedient, Heinley.”

“It’s fine if you want a brave child. But you have to omit some parts when you read a war novel. Why did you read that part where a lot of blood came out of the enemy’s chest when he was pierced by the spear?”

“Wouldn’t it be better to teach our child about war as it grows up?”

Heinley didn’t seem to agree with me, but I had already made up my mind.

I pointed at the door with the book.

“Didn’t you say you want to educate our baby in my womb? This is also education. The baby must learn that if one does bad things, one will be punished. Even its father.”

“His Majesty looks so depressed that I suppose his last meal did not digest well.”

McKenna spoke cheerfully when he saw Heinley approach him dejectedly. McKenna was working overtime sitting on some steps near the office, with a plain oil lamp beside him, a wooden board on his lap and papers on it,

Although Heinley glared at him, McKenna, whose eyes were tired from working late at night, held his ground with a certain drowsiness.

“No matter how scary you look at me, that’s what I feel.”

“Sometimes I really hate you.”

“I often hate Your Majesty.”

Heinley sighed and sat down next to McKenna.

“The war memoirs book I told you about earlier for prenatal education.”

“I did. My Queen caught me and kicked me out of the bedroom.”

When McKenna clicked his tongue, Heinley muttered about the recent injustice,

“The baby should know. If one stabs someone, blood comes out, right?”

“It’s a delicate subject. At this rate, you’ll give your child a knife to stab someone.”

“… I wish I could kick Your Majesty out of here, too.”

Heinley glared at McKenna again because he wasn’t taking his side.

“I’ve been playing with swords since I was five years old, McKenna.”

“So you remember the time you ran away after the Queen, Your Majesty’s mother, slapped your rear?”

“You erase what doesn’t suit you from your memory.”

“You turned into a bird and ran away from home. The King turned into a bird, chased you, caught you by the neck, and brought you back. The palace employees didn’t know it was His Highness Heinley and His Majesty the King, so they joked that even the birds kept by the Royal Family tried to educate their children with proper etiquette. Do you really not remember?” 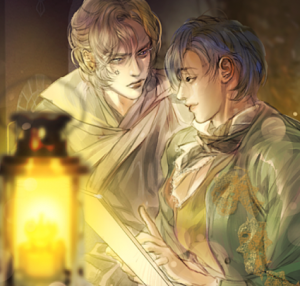 Although it might have seemed like they were fighting, Heinley wasn’t really angry. In fact, the two were very close.

Heinley also knew that even though Navier kicked him out of the bedroom, she wasn’t that angry. He grumbled as if he was sad, but inside he was happy. When Navier was in the Eastern Empire, she repressed her emotions as much as possible.

Heinley couldn’t help but smile at the thought.

McKenna knew Heinley would be upset now, so he grabbed his things and ran out.

Old Duke Zemensia had entered the Imperial Palace to find clues to his daughter’s death. As he walked around, he saw Heinley and McKenna chatting happily, which made his heart ache.

“My daughter lies dead while these bastards…”

Duke Zemensia cursed as he clenched his teeth. Even if he died, he would not let those who caused his daughter’s death be happy.

After he left the Imperial Palace, Viscount Roteschu hurried on horseback to a location indicated by Emperor Sovieshu.

Whenever his horse got tired, he stopped at the nearest town and bought the best horse to continue his journey as fast as possible. He wanted to hurry to save his daughter before Emperor Sovieshu changed his mind. His destination was on the outskirts of the Empire.

After riding for several days, he arrived at a small but beautiful mansion. It was the kind of villa that nobles of simple tastes might use, so he felt a little relieved.

‘He didn’t lock my daughter in an unpleasant place.’

Three men who appeared to be guards stood in front of the mansion. As soon as Viscount Roteschu approached, they pointed their spears at him. Roteschu raised his hands to show that he had no weapons and spoke to the guards,

Since the guards had not received any new orders, they didn’t lower their spears.

At that moment, a cheerful voice was heard.

When Viscount Roteschu looked up, he saw his daughter running towards him.

Viscount Roteschu opened his arms and embraced his daughter. As she snuggled into his arms, he hugged her tightly. He had looked for her for so long. Seeing her safe caused tears to well up in his eyes.

“Father! How did you get here?” Rivetti asked, excited.

But there was a lump in his throat and he couldn’t speak. Tears kept falling down his cheeks, so he just hugged his daughter.

Only then did Rivetti realize that his behavior was strange, so she stepped back in surprise.

Since Rivetti had been missing for a long time, his tears might be from the joy of seeing her again. However, his expression was too sorrowful to be mistaken for tears of joy.

“Father, do you know about Rashta?”

“Yes! It was Rashta who tried to kill me!”

Rivetti exclaimed with her fists clenched in anger.

“If His Majesty hadn’t discovered Rashta’s plan in time and saved me, I don’t know what would have become of me…”

Rivetti’s face turned pale, scared just by saying those words. Her fingers trembled. Time had passed, but it was clear that she still hadn’t fully recovered from the shock of the attack.

Viscount Roteschu was very angry to learn that Rashta had attacked Rivetti. He had heard it from Emperor Sovieshu, but he couldn’t believe it.

He was also angry with himself. If he hadn’t constantly blackmailed Rashta, perhaps she wouldn’t have attacked Rivetti.

‘No, nothing would have changed…’

“She doesn’t want it to be known that she’s a slave, so she attacked you to keep your mouth shut.”

“Then we’ll sink her first! Just reveal that she’s a slave!”

Rivetti shouted angrily. She didn’t know about the situation outside the mansion, so she thought that Rashta, who had attacked her and tried to kill her, was still living happily.

When Viscount Roteschu shook his head, Rivetti was surprised and reproached him.

“I have something to tell you, Rivetti.”

Rivetti was furious, but reluctantly managed to calm down when Viscount Roteschu took a firm hold on her shoulders.

“Your father is an evil man.”

Rivetti knew that her father was not a good person, but she didn’t consider him evil, either. It seemed strange that he would suddenly make such a confession.

“The princess that Rashta gave birth to has become your brother’s daughter.”

“How is this possible? How can the princess be my brother’s daughter?”

Viscount Roteschu’s words were so shocking that she couldn’t immediately accept them.

“Your brother has deceived His Majesty.”

Rivetti finally realized the seriousness of the situation and her face paled.

Viscount Roteschu pondered for a moment before replying.

He would have liked to be honest and say, ‘both your brother and I have been unjustly framed.’ But he didn’t know how Rivetti would react if he did.

No matter what Rivetti did, he and Alan had already become the target of Emperor Sovieshu, who could wipe out the Viscount and his entire family.

However, Emperor Sovieshu made a request. His request was for Viscount Roteschu to drag down Rashta with him, probably because he wanted to get rid of her quickly and, in return, he offered to pardon two of his family members.

Rivetti would not accept this. Viscount Roteschu didn’t know how she would react when he told her that only she and her mother would live.

“Your father is an evil man, Rivetti.”

“Your father always knew. Now it’s all over.”

“Your father knew that your brother got Rashta pregnant.”

“No, that’s absurd! Father, that can’t be true! It’s impossible! My brother is stupid and cowardly!”

Rivetti didn’t accept it and entered a state of panic, came to her senses when Viscount Roteschu shouted her name.

“His Majesty has shown enormous mercy. He has said that only those involved will be punished. You and your mother knew nothing about it.”

“Father! I hate this! I’m the only one who will live!”

“Do you want your mother to die too?!”

“Daughter, my precious daughter. You are intelligent, but young and immature…”

“Your father ventured out for our family and failed in the attempt. I’ll take responsibility for that, so don’t blame anyone. Go back to the estate, take care of your mother and take care of the estate. It’s all yours and your mother’s. Go back immediately. I’ll get rid of the mansion here as soon as possible and send you the money, so pack your things and don’t waste a second. Do you understand?”

Rivetti shook her head in tears.