My ex-husband says he has gone crazy. How should I react in this situation?

1. Check his forehead for a fever.

2. Slap him to make sure he hasn’t lost his mind.

I spoke coldly with narrowed eyes.

Sovieshu flicked his own forehead with his fingers.

“My memories stopped in a moment in the past.”

“I climbed a tall tree to try to pick peaches for you. That’s my last memory.”

That was several years ago. In my days as Crown Princess, I used to read romance novels together with Sovieshu, lying side by side on the grass in the garden. In the parts where the lovers whispered romantic words to each other, we both laughed in embarrassment, and in the parts where the lovers kissed, we surreptitiously looked at each other’s lips.

Among those romance novels, there was a story in which a man climbed to the top of a tree to pick fruits for his sweetheart.

Sovieshu confidently said that he could do it.

The next day, Sovieshu called me to watch him pick peaches for me. However, he fell from the tree and several peaches hit my head.

Despite the pain, I was more worried about Sovieshu, who had lost consciousness when he fell. I tearfully called for the palace doctor, and only later I noticed the bump on my forehead.

Later, when Sovieshu woke up, he came to my room and showed me a handful of peaches. He said,

Strangely enough, my worry was replaced by anger. I grabbed two pillows and struck him on the back.

As Sovieshu tried to run away, the peaches slipped out of his hands. I slipped as I stepped on the peaches, so Sovieshu hurriedly caught me, shielded me with his body and we fell together. 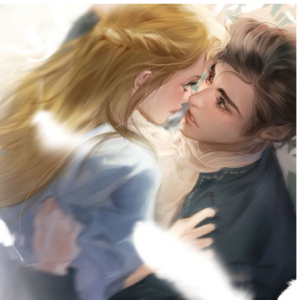 We ended up on the hard floor, our bodies awkwardly entangled.

His dark hair was covered in white feathers, which had come out of the pillow. A feather also landed on my lips.

Sovieshu reached up and carefully removed the feather. Then, I felt the briefest kiss on my lips, light as a feather.

His face was redder than a peach, and he looked at me and jumped up. He reached out to help me up and then ran off, but he also slipped on a piece of peach and fell again.

I heard a loud thud. Before I could ask him if he was alright, he hurriedly opened the door and ran away.

I was too embarrassed to follow him, so I squatted down and hugged the torn pillow.

Our first kiss was filled with white feathers, chaos and the smell of peaches.

Is this what Sovieshu is talking about?

I didn’t expect that my eyes would fill with tears. On this sunny day, it hurt so much to remember the happy times we shared in the past, so I became angry. He’s the one who threw all that away.

What’s wrong with him? Why does he have to talk about the past? Why does he insist on reminding me that he abandoned me?

I have been trying to heal the wounds he caused me by Heinley’s side.

As I stared at him icily with tightly pursed lips, Sovieshu carefully raised his hand and brushed it along my cheek. He caught a tear with his fingers.

I immediately stepped back and repeated as coldly as possible,

Sovieshu smiled weakly and lowered his gaze. In truth, he didn’t seem to be lying.

“I knew it would displease everyone if I came all this way.”

“The peaches fell on you.”

“I had to make sure you were alright.”

When I shouted, Sovieshu finally shut his mouth. I clenched my fists and looked at him with fury, then pointed my finger at the door and shouted again.

These were not words that the Empress of the Western Empire should speak to the Emperor of the Eastern Empire. It was rude and disrespectful.

However, I couldn’t bear to look at his face any longer.

I promised myself that I would treat him like anyone else and that I would not show the slightest vulnerability. But when he brought up our shared memories, the wounds, which had been closed, reopened and I lost my composure.

Sovieshu answered calmly and looked up to meet my eyes.

“I will be obedient.”

After he uttered these unexpected words, he left immediately.

I stared at the closed door with my mouth slightly open. What had he just said…? Obediently? Did that proud man really use the word ‘obedient’?

He complied with my demand…

— I am tired of arguing with you. Can’t you just be obedient to me for once?”

That cold voice echoed in my mind, the words that shattered my pride and plunged me into despair.