Chapter 2 - The Reason She Writes

After school was out, Hiyuki picked up her bag that had already been packed before the class was over, and rushed out of the classroom.

A classmate asked for light novel recommendations, and after Ao answered, he took his bag and left the classroom. He changed his shoes at the shoe rack and went to the parking lot to take his bike. When he was opening the lock, he felt someone staring at him.
He looked back, and didn’t see anyone.
Ao thought he was imagining things. He undid the lock and rolled the bicycle out. He felt a prickly sensation around his neck again.
Someone was watching him?
He turned again.
This time, he saw light brown hair around the corner of the building. The hair was brushed by the late spring wind, and seemed translucent under the glare of the sun.
“Hmm? Hinomiya-san?”
Not expecting to be called, the white hand and slender shoulder poking out from behind the building shuddered, then turned away in a hurry.
“Wait, Hinomiya-san!”
Ao pushed his bicycle along and gave chase.
Hiyuki walked in front of Ao, her long brown hair swaying with each step she took, with her bag clutched tightly before her chest. She was walking at a very fast pace with her white slender legs.
Walking to her side, Ao saw that her lips with a mole besides it were tightly shut. Although her expression were cold, her eyes were red.
“Hinomiya-san, I am sorry about what happened at noon.”
“……”
“I surprised you when I mentioned the manuscript submission, right?”
“……”
“I am really sorry, but, you probably won’t believe me even if I told you I am working as a screener, right?”
“……”
“I just happened to read your manuscript, Hinomiya-san. Your manuscript just happened to be in the batch that was sent to me. I read through the personal particulars, and found your name and our school.”
“……”
Hiyuki’s thin lips remained tightly shut, her eyes downcast as she continued walking. They passed through the school gate and onto the pedestrian walkway, going past the bus stop. After turning into a side street, beautiful houses could be seen on either side of the road. Every household had a flourishing courtyard well taken care of, and the two continued on their way.
“I am not planning to tell anyone about Hinomiya-san entering the Newcomer Contest at all, or thinking about blackmailing you.”
Ah, maybe I shouldn’t mention about blackmailing? Hinomiya felt more guarded to Ao, which made him anxious. But Hiyuki who was walking silently all this time stopped all of a sudden.
The vines covering the wall besides her were blooming with small pink roses, and a large tree filled with white flowers was opposite to her.
Hiyuki bit her lips and lowered her head.
“……”
Her eyes turned redder, and she said with a voice so soft it seemed to be vanishing:
“… Kazetani-kun… Have you, read my manuscript…?
“Ah, yes…”
“… All of it?”
“… Yes.”
“… Until the end?”
“… Yes.”
He read to the last line, going through it slowly and in detail, and filled in a comment sheet.
Hiyuki seemed to be mumbling shyly, lifting her head to look at Ao frantically after slooping her shoulders.
Hiyuki was taller than most girls, and Ao was slightly shorter than an average boy. The distance between their eyes were really close when he looked at Hiyuki who was about his height, which made him panic.
Hiyuki’s eyes were watery,but the mole besides her slightly open lips looked really sexy.
Uwah, my face is hot, is my face red now?
Hiyuki looked at the anxious Ao unconfidently and spoke hesitantly:
“W-What do you think about my work…?” 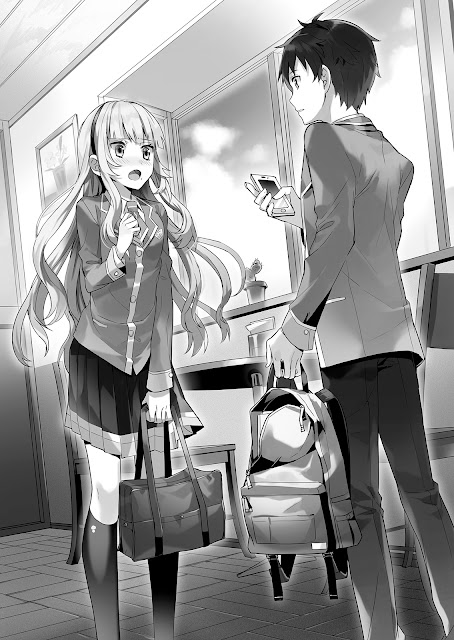 Hinomiya was too serious, so I told her ‘I will teach you everything I know’ without thinking’. Will it actually work, I didn’t research the way to write light novel before.
After having dinner, Ao sat before the desk in his room, staring at the point card given by the cafe. If he accumulates ten points, he could exchange it for a handmade desert. There was a stamp of a teacup on the digit ‘1’ of the card.
He also received a 50 yen voucher.
Under those circumstances, he arranged with Hiyuki to meet at the same cafe after school tomorrow, and he would advise Hiyuki on how to write her light novel.
I might be a screener, but I have never written a novel, and don’t know how to write a good light novel, I wonder if I will be of help. I told her that I would only be providing my personal opinions, and Hinomiya-san said that is fine too.
── Just once is fine, I want to pass the first round of selection.
Hiyuki looked at Ao with serious eyes.
Just for one project, she hope Ao could help her.
“Yes, let’s give it a try, this seem fun.”
Ao smile and muttered.